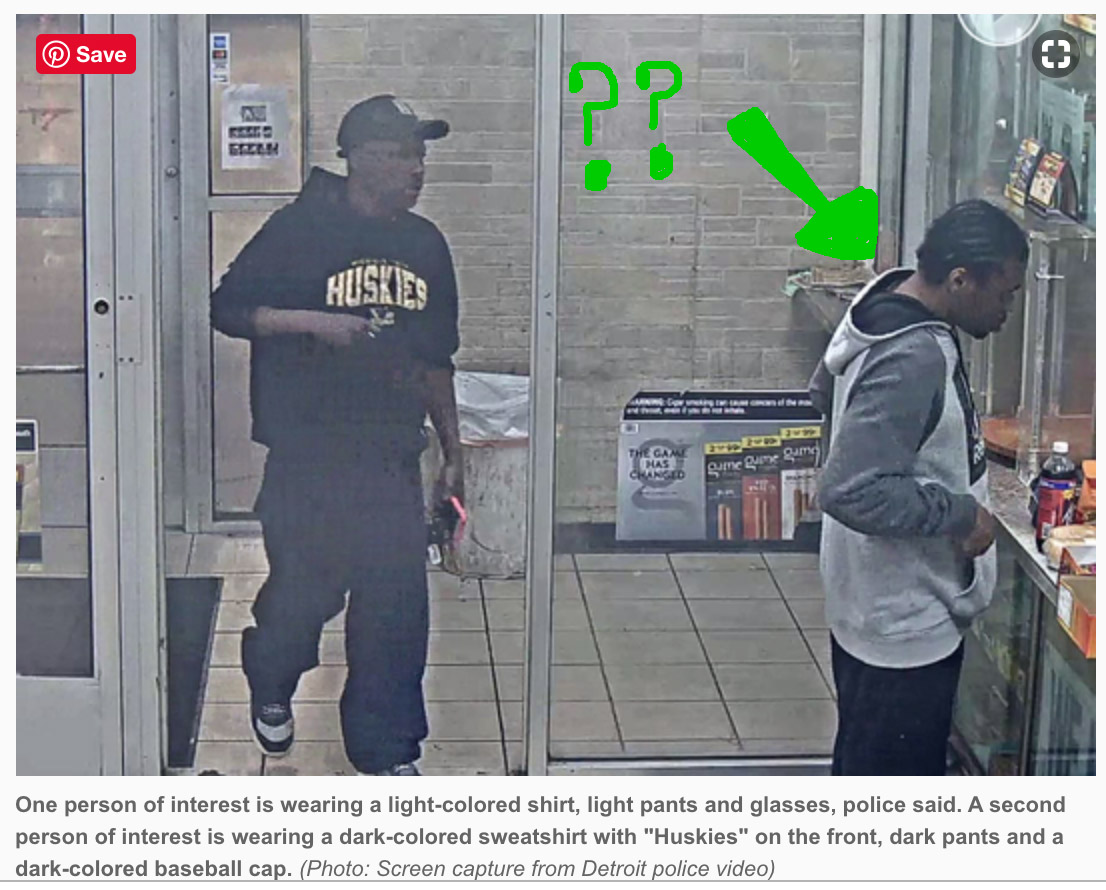 Who’s Who in the Green Light?

← Why Does This Matter To You? The Black Agenda Tour kicked off in Detroit! →

There is a video link in the heading of the article which shows the activity and individuals in question. The goal, I think, is for a reader to click on the link, wait through the ad for flea and tick prevention, and look at the video. But what if they don’t?  Or, even if they do, what concerns me is the freeze frame shot taken from police surveillance video that was placed later in the article.

At first glance it appears that the image is of the two persons of interest noted in the headline. After all, it says “Police say video shows 2 people of interest in fatal Detroit shooting”. Actually it is one of the persons of interest and a person who happened to be buying pop and chips.

Even though the man buying snacks doesn’t match the description below the picture, I don’t think its a reach to assume that a reader would conclude that the two people in the picture are the two people of interest. The Detroit News has put an innocent bystander’s picture in the paper associated with a murder. I want the killers to be apprehended. I don’t want the police to say “close enough” and grab the wrong suspect.

This seems to be a grand opportunity for mistaken identity or at the very least shoddy, confusing reporting.  Or both. And it underscores some of the red flags of Project Green Light.

There should be great concern about the danger of mistaken identity with the Project Green Light program. It is alarming that my face could turn up in the news associated with any number of activities that may take me to a “Project Greenlight establishment“. It does not make me feel safe when I can be put in the newspaper or some other on-line media outlet because I appear on this surveillance footage while I’m minding my own business.

The Connection Has Been Created

A connection has been created in the minds of readers and viewers between the image and the crime. What if that was your son in that gas station at the moment this video surveillance footage was taken that was then arbitrarily placed in the newspaper and online for everyone to see? I would be terrified!

All this because we choose to have in place a system of indiscriminate surveillance that makes one’s identity no longer a personal possession?

Oh wait, were we given a choice?

Was the public made aware that Project Green Light was going allow our likenesses to be taken from police surveillance footage and then given to the newspaper for publication?  Do we not get any say in any of this or are our identities literally being taken and used without our permission? When I think of the number of green light establishments multiplied by twenty four hour surveillance footage, I have to wonder about the effective monitoring and safekeeping of our data. Who is responsible for all this footage and where does it go and how long will they have it?

“This problem [of mass surveillance] has, from the start, been a product of the entire criminal justice system, from federal intelligence agencies down to the most localized police department. At root, it is not about technological advances or questions of labor efficiency. Rather, it cuts to the heart of how governments see their citizens and interact with information.” ¹

In a Deadline Detroit article just published on May 18th where Project Green Light’s facial recognition software came up for scrutiny, the Chief of Police took to the offensive:

“I take great umbrage to your inference that our department would arbitrarily, without reasonable suspicion or legitimate law enforcement purpose, violate the rights of law-abiding citizens.”²

And yet…here we have a case where a citizen may have just been arbitrarily linked to a murder.

Here is the link to the full article: https://www.detroitnews.com/story/news/local/detroit-city/2019/05/20/detroit-police-video-2-people-interest-fatal-shooting/3737578002/

← Why Does This Matter To You? The Black Agenda Tour kicked off in Detroit! →