FORCE Detroit is thrilled to have a guest blog post from $500 Holla’ Winner Alondra Alvizo, co-founder of Vizo’s Voice. For a little backstory and to learn more about their valuable work, check out this blog post! 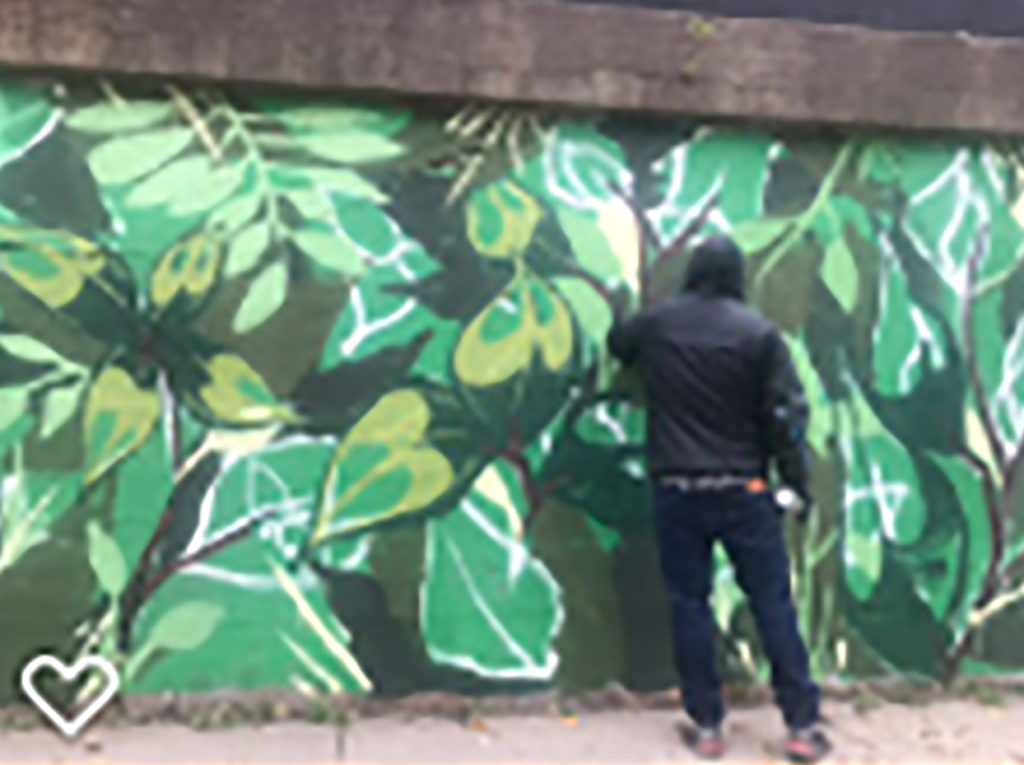 Growing up in Southwest Detroit, the most prevalent form of art I saw throughout the community was what hipsters in Detroit now call aerosol art. The original and criminalized form of that is called graffiti. Driving to school, I would always see the rooftop water tanks with names like GASM and wonder, “Who is GASM and how did GASM even get up there?” A muralist I recently hired told me that those spots are called heaven spots. I asked him why. He went on to tell me that heaven spots are the riskiest places to put your art, they show how much skin you have in the game – to put it briefly – are you willing to die for your work? That sentiment stuck with me.

Upon graduating from Michigan State University, I came back to work in Southwest Detroit. I moved back to the community and work less than five minutes away from where I live. Everyday on my way to work I see a vandalized viaduct that is dark and gloomy and I also see a building that went to ruins. This building is called Kid’z Playland. Back when I was growing up, the building was adjacent to a flea market that most of the community visited every sunday after church. It was our one outing a week. We’d go eat breakfast there and then if you were lucky, your parents would take you over to Kid’z Playland which became the mexican version of Chuck E. Cheese. There was a playpen, a bouncy area, ticket earning machines, pizza and prizes.

Over time, I can only assume that bad business led Kid’z Playland to become one of the many blighted properties in the city of Detroit. It became an illegal dumpsite that was unsafe for children walking to school and the community overall. There are two schools on the cross street and many students walk both to Detroit Cristo Rey High School and Academy of the Americas Elementary School through the viaduct adjacent to Kid’z Playland.

This is where working for an environmental advocacy non-profit in Southwest Detroit really pays off. I knew that we had a huge volunteer event happening the week of September 10 until September 14, 2018. This was the week that our organization calls GM Cares Week where we have anywhere between 50 to 100 volunteers per day working on what we call signature projects to reduce the blight in the community and create safe community spaces. After a conversation with the Director of Programs at Southwest Detroit Environmental Vision, Sarah Clark, we agreed to make Kid’z Playland a signature project in conjunction with a mural beneath the viaduct on Junction and Federal street.

For the Kid’z Playland project, we received a donation from the owner of El Club, a newly established all ages event venue on west Vernor Highway, to pay a local artist to help keep the group of GM volunteers entertained while we removed all the blight on the property. We were able to provide a stipend to DJ Lost Boy, member of We Are Culture Creators. We Are Culture Creators is a community driven art collective in Southwest Detroit. With sounds by DJ Lost Boy, dumpsters by the City of Detroit and hard work from General Motors volunteers,  we were able to remove a dumpster full of debris, sort over 50 tires for city pick up and remove three gigantic piles of brush for city pick up as well. All in a day’s work, might I add!

Simultaneously, we worked on hiring a muralist that would be representative of the community. A muralist who would see our viaduct as an opportunity to build an artistic portfolio for themselves and to include community voices within the art they created not just someone who saw this viaduct as another task on their to-do list. We wanted an artist who was willing to put their heart and soul into the viaduct. We wanted to be able to see the work and feel it in our bones, feel ‘the resilience and pride of Southwest Detroit’ as Sylvia Gucken, the assistant to the chairman of the Ideal Group always says.

Our contracted muralist is a 23 year old Southwest Detroit native who has been exploring his artistic talent since the young age of five through graffiti, notebook doodles, and canvas work. Also a member of the We Are Culture Creators collective, his vision for the viaduct was driven by mother earth and the connectedness we all share as a community.

DeMacio Soto is working on over 100 feet of mural space and has donated his time and talent as we work with local businesses to gather donations aiming to provide him with a stipend upon completion. We gladly gave him paint donations and a supplies budget as well as permission to conduct this work from our local Police at the 4th Precinct and Conrail (the owner of the viaduct). His work has inspired community engagement and city wide engagement. Some time ago, our organization applied to be a qualifying viaduct for the CIty Walls Project with the city of Detroit. They denied us but resurfaced in our call log after watching DeMacio’s work on one side of the viaduct. Zach Meers, the lead for that project, called us and asked if they could do the other side of the viaduct and after a few meetings they sent Jesse Kassel to conduct that work.

Although our partnerships with the city of Detroit are mostly mutually symbiotic, this partnership was more parasitic. The clean up at Kid’z Playland was phase one of a multiphase plan for the revitalization of the area. The ultimate goal is to create a plan to utilize Kid’z Playland because in this work, you begin to realize that a space not utilized becomes a space that’s vandalized. City Walls took ownership of the walls around Kid’z Playland for mural creation, Jesse Kassel – an artistic based in Washington D.C.- would be completing this work. I was working with a few companies waiting on some paint donations and over 15 community artists who have been doing aerosol art for the past decade or more to create another wall of legends in Southwest Detroit. A wall of legends is a wall that showcases some of the local legends in the graffiti world. As I was ironing out the final details for our muralists, I realized that one of the walls across Kid’z Playland was already being painted out.

As a community member I was enraged because had that space still been blighted, I felt the city wouldn’t be trying to do a mural there. I was even more angry that when asked at a community meeting if the city planned on doing any other site additional to the viaduct during this project, we were told that they would only focus on the viaduct. We were happy to hear that considering we had plans for the Playland. I reached out to Jesse Kassel directly and asked if that was his doing. We agreed to meet and discuss. Jesse was unaware of all our plans, he was just told to paint that section as well. After meeting, we developed a collaborative plan of work that would allow both of us to complete the tasks we had in mind. Jesse finished one wall and headed to the viaduct, while our graffiti artist team headed to the other wall for creative completion.

DeMacio is very close to completion, weather permitting we will see a final product late this month. Kid’z Playland has been staying mostly clean, we are removing debris as it accumulates with help from the City of Detroit. Some of the pieces on the wall at Kid’z Playland are already completed, one of my favorites is a piece that draws attention to ALS, or amyotrophic lateral sclerosis disease. That piece was created by a younger artist named Nate in honor of his uncle battling ALS.

This work has been rewarding on many levels. It has provided a space for artists, mostly of color and belonging to this community to have a voice. Representation matters and we are seeing it in the kind of work that is blossoming from this. I have had the privilege of leading this initiative with the question that continuously pops up in my brain being, are you willing to die for your art?

Being a co-founder of Vizo’s Voice and doing all the work we have done on a budget has really pushed me to limits that I’ve never thought I could operate in. What I have realized is that healing is both continuous and non-linear but above all else healing is our own responsibility. My anger against the City Walls Project stemmed from continually being disenfranchised of the spaces we have taken ownership of through our actions and commitment to a cleaner, brighter Detroit. I commend Kassel on how welcoming he was of the diverse viewpoints and his eagerness to collaborate on a solution that best fit for both of us. The Kid’z Playland project and the mural project on Junction and Federal street viaduct has brought so many young artist to the table and has encouraged intergenerational mentorship amongst the artists. Local police have been instrumental in allowing our artists to work safely. We’d like to thank our police officers who get continuous calls about our artists being out and serve to assure our community is safe and in the process of renovation.

I’d like to thank everyone who has made these initiatives possible through their time, talent, contribution, courage, commitment, and consistency to healing communities with art on the forefront of justice and the overall goal of improving our community while decriminalizing our graffiti artists.  None of this would be possible without our key partners, The Ideal Group, the City of Detroit and General Motors. Southwest Detroit will always have a special place in my heart and thanks to the work at Southwest Detroit Environmental Vision, we will be at the forefront of changes within our own neighborhoods. To SDEV staff, we may be few but we are mighty! Thank you for all you are and all you do.

With love and light,

*Disclaimer: this blog post was written and affirmed by Alondra Alvizo as Co-Founder of Vizo’s Voice and in no way is an opinion represented or shared by Southwest Detroit Environmental Vision as an organization, its key partners, stakeholders, constituents, staff or other. This blog post has been written independently from the organization in all its forms.*